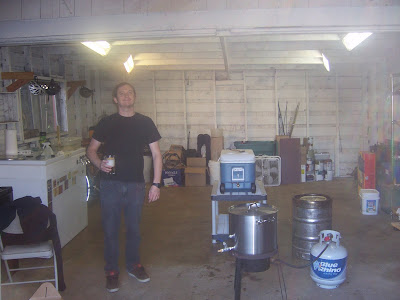 My friend Ryan came over the other day to check out my new digs and help out with a batch of homebrew. He has a few batches of homebrew under his belt, but he had never seen an all-grain brewday or brewed with anyone else, so I hope he had a good time and learned a bit (and remembers it after all that drinking, man that guy is a lush!)
I'm still in the process of getting moved in and set up at the new house, but in the mean time I thought I would kick things off with a nice, simple beer that will hopefully be very tasty and drinkable. It's a recipe that, if it turns out well, I would like to pitch to Carston and Eric as something we could brew at Alameda. Even though this recipe is pretty straightforward, I just figured my best shot at getting it brewed would be to come to them with a finished product that we could scale up, and make improvements if we think there should be any. 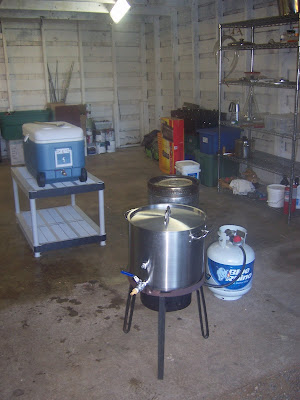 So, this is the new man-cave. It is not attached to the house which unfortunately means that you can't gab a beer in your socks. It is also very uninsulated, and I fear that the kegerator will be quite cold during the coldest winter months, and brewing during that time might be a hand-numbing bitch. But my ultimate goal is to make it into a place where homebrewing can be a fun, relaxing hobby I do on my off days, instead of the labor-intensive brewdays I have done in the past. Including the homebrew, I have gotten in 4 brewdays this week, so when you brew for work you don't really want to be coming home to something that just ends up being a labor-some chore.
I need to put in some kind of basic sink or wash tub, and insulate my small stainless mash tun which used to fit in the oven to stay warm. After that, I might invest a small amount of cash to get my 10 gallon system a little more workable.
Here's Ryan tenderly measuring out some hops... 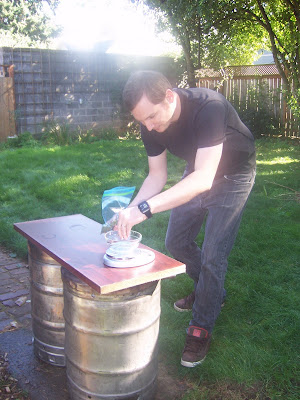 nice man cave and use of cheap workers

Looking at the first pic of Ryan and reading rest of the post all I could think of was DOUG! These dudes are brothas from another motha!

when you say "burton salts" do you mean the little packet they sell at the homebrew store? or slight salt additions to pronounce the bitterness?

Yes, it's the pre-mixed Burton Salts from the homebrew store, which I use to kind of "half-Burtonize" the water. I think for full Burton on Trent you are supposed to use 1 tsp/gallon of brewing water. I just want to get a nice snappy bitterness and reduce the mash pH a bit, nothing major.

If the conservative women give you grief over the name, you can always call it "Denny the Pigmy"
You can figure out the references I am sure.
Makes me thirsty

I might have to check those pre packed salts out. Ive been going the lazy brewer way lately by just adding a set amount of gypsum and calcium chloride, going slightly more in either direction depending on whether it's a bitter beer or a roasty beer. It's such a chore to work it out exactly when our water is so neutral anyways. Do you do many adjustments at Alameda?

We only add Gypsum to certain hoppy brews at Alameda. We don't do any adjustments for pH, just for emphasizing hops, if that makes sense.