Please participate in my Poll to the right! YOU can help me decide a name for this beer. 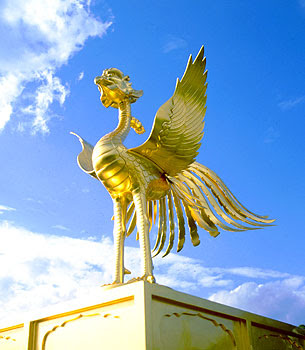 GOLDEN PHOENIX
I like this one...Mythical but not a Devil or Dragon reference. 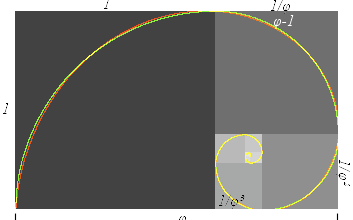 GOLDEN SPIRAL
This one is also timeless....evocative of the common threads in nature, art and science. 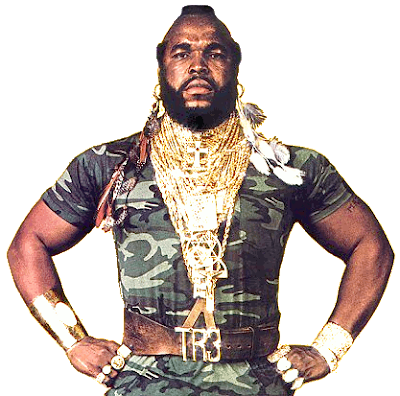 Brew & Chew at the Diamond 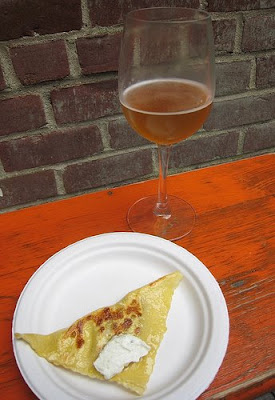 I've been meaning to post about this really fun event that took place at the Diamond Bar in Greenpoint, Brooklyn on Sunday, September 28th. The basic idea was for homebrewers to pair their beers with foods, and have a competition, judged by the public. Dave Pollack formatted this as a benefit, all cash going to a community gardens project called East NY Farms. They teach local kids to farm, and run a farmers market where they sell their produce. This also benefits the neighborhood as a resource for fresh produce.
All in all, 6 teams competed and a good time was had by all. There were good pairings and great pairings, but I was very pleased to see that all teams made something tasty.
The original plan was for me and Ray to be a team, until he douched out and had to go to a wedding. Luckily my girlfriend Clarissa stepped in and helped with the food, or I would have been screwed. We knew it was a special sign when we scored our little propane cooker at a Brooklyn flea market for $7, with gas.
We really like to hit up the farmers markets and cook seasonally, which is why, after some indecision, we decided to do butternut squash inside of ravioli. Very fall-esque. We used some sage and onion to compliment the squash flavor. And goat cheese pretty much makes anything taste better, so there you go. The pasta was purchased fresh from a place in Manhattan, so we made the fillings, stuffed about 120 large raviolis, and parboiled them to be fried in butter later. It was really good.
The beer was me and Ray's first saison with the French saison yeast, which I called "session" saison in an earlier post. It was fantastic. You can't see in the picture the amazing head this beer poured with. Nothing lasts forever I guess. 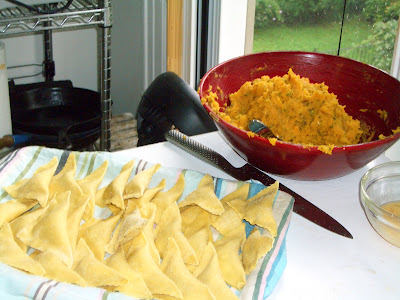 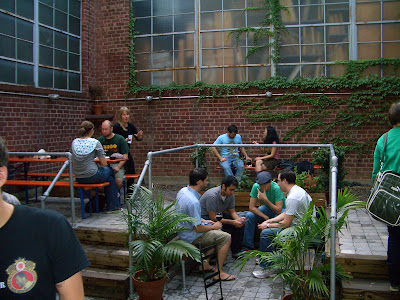 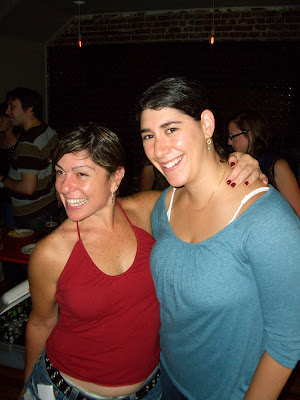 There were 2 tasting sessions. 50 people per session tried each team's food and beer, plus they got to go back for seconds of their 2 favorite teams. We tried to get our friends to come and vote for us, but nobody came! Their loss... even better was to hear so many strangers saying our stuff was great! I mean your friends would HAVE to say that.
A few of shots of the event, above is the Diamond's back yard, and the better halves of Vlad and Eric. Below, Dave Pollack, the owner, and his cute French bulldog. 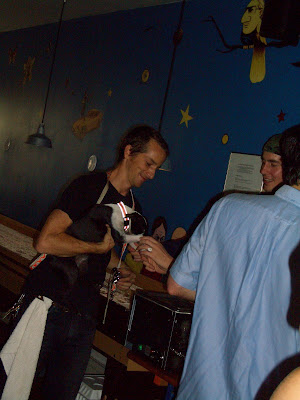 The end results were, out of 6 teams, we took 3rd. That might not sound very good, but here is how I would put it: these things are not very fair. Quite simply, if you want to win, it pays to bring your friends. Actually what you wanted to win was 2nd prize, a $150 gift certificate to Fette Sau, an awesome BBQ restaurant and beer bar in Williamsburg.
To speak as objectively as I can on it, and this was also stated by a lot of other people, I thought our team or Vlad & Eric's team deserved first place. Vlad's Bock was tasty and the smoked ribs by Eric were delicious. The wining team had some really nice and beautifully presented food, but they actually brought 2 beers, which we thought was not really appropriate. And I still think our beer kicked the most ass!
Anyway, that's just the super competitive side of me speaking. The bottom line is, I think everyone had an awesome time. 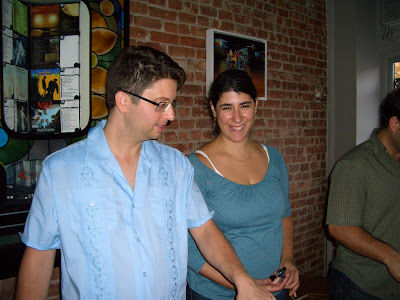 This guy above, Vlad, is the MAN! What a suave dude in his Cuban gueyabara. Is that HOT or what? You can hardly tell he's a drunk... That's my V.P. for the homebrewers guild by the way, soon to be El Presidente. His awesome wife Amy is to the right, along with half of Eric's head. 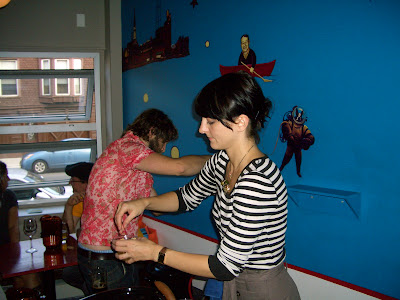 This team above, I don't remember their names, but they made a robust porter and lamb stew. It was tasty! I had never met them before, but they are homebrewers from my neighborhood. So that just goes to show, no one really knows how many homebrewers there are in the city.
So that's it. Looking forward to the next one, possibly in May. Thanks Dave and everyone else who participated, for a great time. Also thanks again Clarissa for helping out, I couldn't have done it without you!