Sorry I haven't posted in a while.  I suck!   We have made the move to Ohio.  Things are good.  I'm brewing for Jackie O's, still in the training period while the production site is being constructed.  I'm glad to be back home, but I also miss the brewing scene in Portland, and more importantly, our friends we left behind.  We are planning our wedding, for which I will brew the same Belgian Blond with lemon verbena, yarrow, and grains of paradise that I made for Lou&Liz and Tony& Annie's wedding.  I hope it turns out well on its first commercial iteration.

Right now I have a lot bigger priorities than keeping this blog going, but I would like to keep writing about brewing, either on this blog or on the Jackie O's blog.  I'll keep you guys and gals informed as things progress.  Happy brewing!
Posted by Seanywonton at 6:39 PM 3 comments: 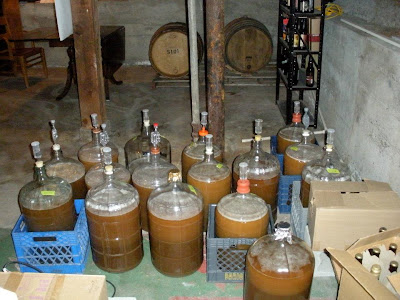 The Temperanillo barrel aged Flanders Red has been in the barrel for almost exactly a year now, and it's tasting great. The acidity is moderate, with a little acetic character. But the complexity from the Brettanomyces, and the wood and wine character from the barrel is amazing. It sucks to say, this barrel aged beer is putting any of my previous carboy-soured homebrews to shame. That in itself s a big lesson in how important a barrel is to brewing quality sour beers. I'm not saying "Don't brew sours if you don't have a barrel," (some people have had a lot better results with the carboy sours than I have) but I believe it makes a real difference. In some ways this beer feels like it brewed itself, and that we had very little to do with its success.
In any case, since I am going to be moving away soon, I have to give up my slot in the group project for the next beer to go into the Temperanillo barrel. My slot will be taken over by Mike Wright, the owner of The Commons Brewery (formerly Beetje nano-brewery). The barrel project will still be strictly homebrew, but we did have the advantage of brewing all the wort at The Commons in one day, with a double-batch on the 35+ gallon "Beetje" system (the original nano-brew system from before" Beetje" expanded to a 7-barrel brewery and became "The Commons".
The group decided to do a golden sour this time. After some deliberation on the recipe, we stuck to a pretty simple design:
1.062 O.G
85% Gabrinus Organic Pilsner malt
8 %Vienna malt
6% CaraHell
1% Acidulated malt
Mash at 154
Boil 90 minutes
10-12 IBU's from Perle hops at 60 minutes. 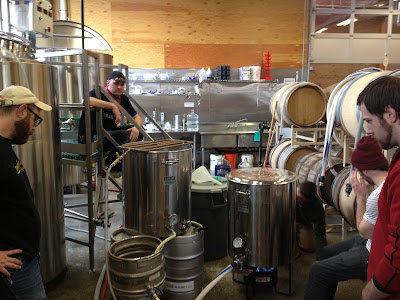 As the above picture clearly illustrates, we brewed the beer on a Sunday morning, and many of us had had a late Saturday night. Luckily we had donuts from Acme Donuts, and not much work to do for a lot of the time. Some drinking was done and it was decided that we all really like Green Flash "Rayon Vert", as well as The Commons "Flemish Kiss", both dry hopped, brett-aged belgian pale ales inspired by Orval. 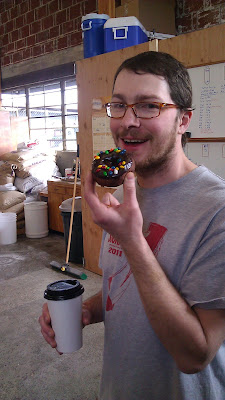 The brewday was very straightforward, but it did end up being about 12 hours, and we still had to get 16 carboys over to Walker's house by car. 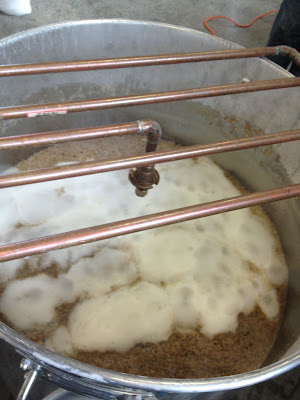 Since the only big space we had to ferment the beer in was Walker's basement, we decided to use an alt yeast to ferment the beer. Wyeast #1007 / German Ale Yeast is one of The Commons house yeasts, and we fermented it at ambient basement temperature, which ended up being about 63 degrees fermentation temp. 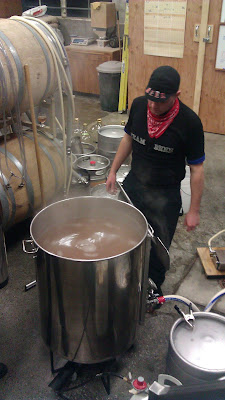 We are scheduled to rack the beer into the barrel on the same day we rack the Flanders out. We are going to do as little barrel cleaning as possible, possibly just giving it a quick cold water rinse to get most of the trub out. Possibly not even that. We also discussed the idea that if for some reason the golden sour does not progress enough in actual sourness, because of the clean primary fermentation, we could top-up with a strong lacto culture, possibly isolated from a bottle of Fantome or Cascade beer. 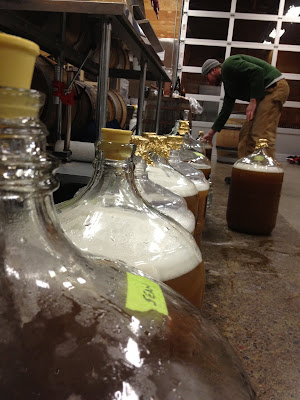 As it turns out, we are racking the Flanders out on March 4th, exactly one year after it was filled. That wasn't planned, I just realized it today when looking back at the notes for the first barrel fill. I won't be in town, as Clarissa and I will be in San Clemente for the birth of her sister's first baby. Sounds like a visit to Pizza Port is also in order!
I still haven't gotten around to putting up a post on our other barrel project, the Old Ale with Brett C. that I jokingly call the Billy The Mountain Clone (it was first intended for a 2nd-used bourbon barrel, but we ended up using a pinot barrel due to availability, just like Upright's Billy). I guess I'll get to this when we pull a sample from that barrel, which should happen some time in March.
Posted by Seanywonton at 10:41 AM 1 comment: 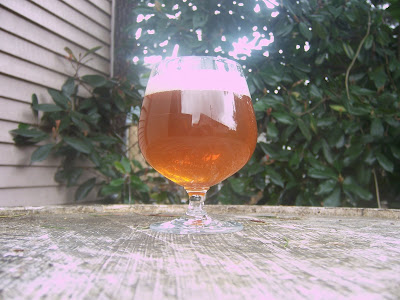 To preface this recipe and tasting a little bit, I'd like to talk about yeast choice. Normally, when it comes to IPA's, I am a Cali ale yeast guy, and I wouldn't think of using another yeast. But in this case, I went to the homebrew store and they were almost cleared out of yeast! I could have gone back for some Cali later, but I got a little lazy and decided to go down to a local brewery for some of their house yeast, which is the Fuller's strain (or Wyeast 1968 ESB yeast). Now, although this isn't my first choice, I had to give it consideration because the brewery is cranking out some great IPA's with it. I won't mention names, but if you were to Google-map my house on NE 57th and Failing street in Portland, it would be a fairly large and well-known brewpub about a mile from my house.
So, I talked with a friend who is one of the brewers at this brewery, and he had some interesting insights on homebrewing with the WY1968 yeast. His observation is that it does not ferment out as dry in a homebrew as it does on a professional level. I would think that the main reason for this is the high flocculation of this particular yeast. It tends to drop out fast and heavy after fermentation, leaving some residual sweetness and some diacetyl in the beer. On a pro level, in a big conical, the natural convection in the fermentation will keep this yeast up in suspension a little longer than in a carboy at home. So his (and my) solution to this problem was to mash low for fermentability, and more importantly, to start agitating the fermenter pretty heavily after primary fermentation starts to slow. I was shaking/rousing my yeast 2-3 times daily when I saw signs of it slowing, up until the day I dry hopped it. And after that, I still agitated in once a day or so.
I think this did help to reduce diacetyl to very low levels (not none, but not noticable), and also helped get a few more points of attenuation, although I think it would have finished slightly drier and even less diacetyl with Cali ale yeast, for sure. See my "overall" comments for even more thoughts on this, below. On to the tasting:
Appearnce: Slightly hazy golden-orange, I assume haze is from dry hopping and overall hop load. White head with good lacing, thanks Carapils.
Aroma: Citrus, Citrus, Citrus (mainly orange) from the hops, some evergreen, some fruity esters and alcohol, some background malt sweetness. No noticable diacetyl but it is probably there in some very small amount. Not hot, no off aromas.
Flavor: Assertive first sip of hop resins, and malt presence with some caramel and mid-palate sweetness, followed by some hop tannins, and a spicy lingering bitter finish. Moderate alcohol on the finish, not hot, just a substantially strong brew.
Mouthfeel: Moderately full body thanks to some residual sweetness and dextrins. Resiny hop bite with a slight hop astringency (green tea like), not out of balance though. slight warming finish.
Overall: Good drinkability, good balance (for an IPA). The slight sweetness, to my palate, is sometimes welcome, other times I think it gets in the way a bit of a full-on hop blast. This almost drinks like some sweeter imperial IPA's I have tried. I think with a cleaner yeast, it might be easier to go back for a second pint, but maybe I am just being a little too picky. I really wish I had done a side-by-side fermentation with Cali yeast! One additional thought, the final gravity of 1.017 is not that high, but there is definitely a perception of sweetness. I think this might be due to the difference between residual dextrins vs. residual simple sugars, which I'm sure this yeast left a little bit of. So, I think it's probable that this beer would taste different than the same beer fermented with Cali and mashed a bit higher, even if they finished at the same gravity (if that makes sense).
OK, whatever, here's the recipe:
Recipe: IPA - Flight & Simcoe
Style: American IPA
TYPE: All Grain
Recipe Specifications
--------------------------
Batch Size (fermenter): 6.30 gal
Boil Size: 8.00 gal
OG: 1.069 SG
FG: 1.017
ABV: 6.9%
Estimated Color: 6.7 SRM
Estimated IBU: 84.4 IBUs
Brewhouse Efficiency: 89.00 %
Boil Time: 60 Minutes
Ingredients:
------------
Amt Name Type # %/IBU
12 lbs 8.0 oz Pale Malt (2 Row) US (2.0 SRM) Grain 1 92.6 %
8.0 oz Cara-Pils/Dextrine (2.0 SRM) Grain 2 3.7 %
8.0 oz Caramel/Crystal Malt - 60L (60.0 SRM) Grain 3 3.7 %
14.00 g Simcoe [13.00 %] - Dry Hop 6 Days Hop 11 0.0 IBUs
42.00 g Falconer's Flight [10.50 %] - Dry Hop 6 days Hop 10 0.0 IBUs
28.00 g Simcoe [13.00 %] - Boil 0.0 min Hop 9 0.0 IBUs
42.00 g Falconer's Flight [10.50 %] - Boil 0.0 m Hop 8 0.0 IBUs
28.00 g Simcoe [12.40 %] - Boil 10.0 min Hop 7 9.4 IBUs
28.00 g Falconer's Flight [10.50 %] - Boil 10.0 Hop 6 7.9 IBUs
28.00 g Falconer's Flight [10.50 %] - Boil 30.0 Hop 5 20.2 IBUs
28.00 g Simcoe [12.40 %] - Boil 60.0 min Hop 4 46.9 IBUs
Notes:
------
Mash in SS pot
4.75 gal + 2 gr Gypsum + 1 gr. CaCl
149-50 for 40 min, then raise to to 152
152 for 30 min, then sparge out
5 gal sparge, no minerals, 175 for starters but quickly fell to 168ish
Collect 7.5 gallons (held off .5 gallon of that to add later as "top-up")
Wyeast nutrient & whirlfloc at 10 min
Pitched 300 ml WY1968 slurry (78% measured viability), pretty thick stuff.
80 seconds of O2
Pitched at 69 degrees
Ferment in SS keg at 68
after 48 hours, start agitating fermener (rocking) 3x per day.
1/11/12 -1.017 Dry hopped loose in fermenter. Agitated every day or so.
1/17/12 Racked to keg
Posted by Seanywonton at 12:31 PM No comments:

Big changes abound! Clarissa and I are going to get married, and we are moving back to my hometown of Athens, Ohio. I'll be working for Jackie O's brewery as the pub brewer.
Here's a local newspaper article on the subject of Jackie O's expansion.
I'm super stoked to get the opportunity to run the pub and work with the brewmaster, Brad Clark, on some of the planning for our production site. I've had some great experiences out here in Portland, but I really love my hometown, and I have always intended to get back to the midwest at some point.
I'm currently planning on starting in May, but that might get pushed back if our licensing on the new production site gets held up (I hope not). I would like to keep blogging while I'm working at the pub. I'll have to talk with them and see how they feel about that, but I imagine they'll be cool with it.
I probably won't be homebrewing at all, to be honest. I want to give the pub everything I've got, and since I'll have some creative license, I won't have to do my experimentation on my days off. Plus, I'm really looking forward to getting into some other non-beer hobbies, like gardening, hiking, and maybe even fishing and hunting.
Posted by Seanywonton at 10:40 AM 6 comments: