This just in: I'm working for Alameda! 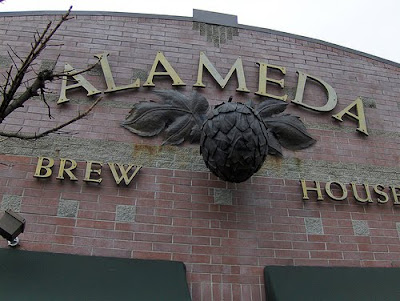 I've got some awesome news. I was recently contacted be Carston Haney, the brewmaster at Alameda Brewhouse, about working part-time in the brewery. This is really, really cool! First off I really like Carston and Eric, the 2 brewers. Second off, it's a first of sorts for me. Not my first paid work for a brewery (I've been paid to help with bottling runs at Upright and Cascade Brewing), but my first "permanent" position in a brewery. I'll be starting off at the bottom, washing a ton of kegs and doing beer transfers, CIP's, and kegging and that sort of thing. All stuff I could use the practice on, except keg washing, but I really don't mind keg washing at all. If you don't like cleaning, don't become a brewer because it's at least 75% of the job, unless you are one of those high-end suit brewers like Garret Oliver (wink).
I had to go through OLCC training, since their brewhouse sits behind the bar. I did the online course, and boy that stuff will scare the bejezus out of you! I had dreams about drunk drivers and state troopers for a couple of nights and when Clarissa went out to a "girl's night" last Wednesday I was like "call me if you can't drive home!!!" Anyway, the online class is super easy, I got a 100% on the test. 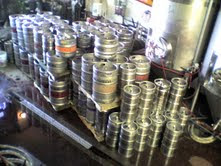 Alameda maxes out their 5 bbl system at the brewpub, so they are currently brewing at Roots in addition to meet the demand. It's not a contract brew. Carston brews the Alameda beers on Roots' 10 bbl system.
My first day on the job was spent washing a mountain of kegs at Roots. I think it was 9-10 pallets worth, and the keg washing machine is not super fast. It's a home-made job where you line up the kegs in a daisy chain for the washing cycles. It took me about 15 minutes to do 4 kegs, and I could have done them faster, but I wanted to be thorough
and make sure they were super clean.
Here are some more pics of the keg washer. It's not romantic, but hey, that's what goes into making beer. I didn't screw anything up but there was one minor almost-incident during the day. There is a long exit hose that we snake down the gutter drain to drain out leftover beer, yeast and caustic. We usually keep a keg over the end of the hose because the spray gets a little violent as the last of the liquid and air is pushed out the hose. Well on the last batch of kegs 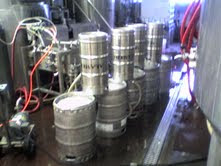 when I was washing the keg we keep over the hose, I accidentally got the air pressure up to 50-60 psi while pushing out the caustic. I heard a loud noise, and looked over to see a geyser of hot caustic and yeast blowing out of the drain about 8 feet in the air in all directions. Imagine the blowhole of a whale as it surfaces if you are having a hard time picturing this. Well, everything was fine and it didn't make too bad of a mess, but luckily no one was standing over it!
I guess the obvious question to those of you who have been keeping up with my progress into the brewing profession is "What about Breakside?" I'm still planning on working for Breakside too, but we have not received our TTB approval so we cannot legally brew beer yet. 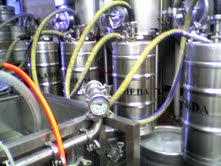 I've been homebrewing too. Just brewed up the 3rd batch of Meetification pale ale last week, and I'm hoping to brew an alt beer tomorrow with the yeast-cake of Cali ale yeast. I'm going to use a proven alt recipe from Brewing Classic Styles, but ferment with Cali at 60-62, and see how that works out.
Posted by Seanywonton at 11:36 AM 5 comments:

About a month ago I brewed up the second batch of the "Deliverance Kentucky Sour" with my friend Forest. The beer has changed a bit this time but remains true to the original idea. First off, I'm no longer calling it a "Kentucky Sour". Taking a cue from Cascade Brewing and their excellent "Northwest Style Sour Ales", I'm simply calling it an Appalachian style sour ale. As you will see in the recipe, a few things have been done to actually authenticate this. Namely, I used aged Cascade hops that were grown in Ohio, and at least half of this batch will be aged on American oak, possibly soaked in bourbon for some extra flavor. I have 10 gallons this year so I get to play around a bit with using different oak, spirits, or possibly fruit. I used a carafa for color this time as opposed to chocolate rye, and I found a great 80-90 L crystal rye malt to use instead of regular crystal 80.
Also, I fermented this beer with the Rodenbug blend mixed by Al B. That should help it get sour and more complex sooner and better than the berlinner weisse blend I started with last year.
Deliverance: Appalachian-style sour ale
Brewed on 3/18/10
Recipe is for 12.8 gallons pre-boil, 11.4 gallons post-boil, all grain
O.G. 1.064 IBU's about 17
14.5 lb. Glen Eagle Marris Otter malt
4 lb. 3 oz. Rye Malt
2 lb. 2 oz. Crystal Rye 80-90L
1 lb. Carafa Special II 550 L
2 lb. Munich malt
.5 lb. Rice Hulls
84 gr. Cascade homegrown hops (aged 1 year at room temp, guestimated at 3% AA) 60 minutes
Mash: 7.5 gallons water with the following additions:
5 gr. chalk, 5 gr. baking soda, 2 gr. gypsum, 4 gr. calcium chloride
Mash in to 153 for 60 minutes
Sparge with 8.5 gallons at 170
Collect 12.5 gallons at 1.058 = 85% efficiency
added 1 qt. top-up water
Boil 60 minutes
yeast nutrient at 10 min
Chill to 68 and pitched 1/2 cup thick slurry per carboy of the Rodenbug blend (3rd generation)
Fermented at about 68.
Racked to secondary on 4/12/10. 1.022, only a light trace of funk so far, but tastes good!
12/14/10 Racked half the batch onto 6.5 lb. seeded Montmorency cherries. It also got some of the dregs from the E-Z Lambic. 1.012, and tasting like a stout with a nice little sour cherry character already. Should be interesting.
Posted by Seanywonton at 12:16 PM 2 comments: 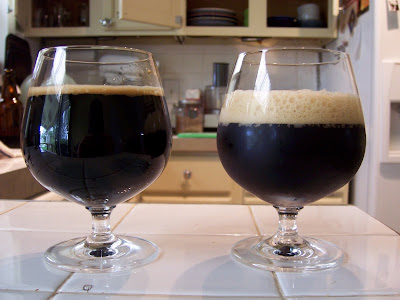 LEFT: Smoked Russian Imperial Stout 9.8% ABV, 91 IBU
RIGHT: Peat-smoked session Porter 4.1% ABV, 23 IBU
Time to for a taste evaluation of the "2 Stouts, 1 Mash" parti-gyle beers. I realize that I have been slacking about doing tastings of my brews and it would probably serve readers better if they knew my opinion on the final product. For what it's worth, sorry. I'll try to do better!
Smoked RIS (sampled at 55 degrees):
Aroma: Rich chocolate / sharp roasted malt up front, rich sweetness, light American hop profile, Alcohol warming and spice, and an earthy, subtle smokyness. Smells nice already but time should improve it as alcohol and hops recede a bit.
Appearance: Jet black with a light reddish-brown head, good lacing. Fairly low on carbonation, but good for style and for a slow-sipping beer.
Flavor: Rich sweet caramel malts countered by a healthy dose of chocolate and burnt character, fairly smooth for such a young strong beer. Balance is toward the malt, with a light resiny bitterness after swallowing. Some hop flavor noted. The smoke flavor is low and mainly towards the end. Clean but present alcohol warmth.
Mouthfeel: Creamy, full bodied, nice roast bite and hop resin at the end, warming alcohol. No astringency.
Overall: I'm pretty impressed with this so far. The components blend very well together. There does seem to be a slightly "meaty" aftertaste to the beer which may be from my over-addition of brewing salts in conjunction with the smoke flavor, but it is fairly subtle and I'm still hoping it goes away with time. I was expecting just to sample an ounce or 2 and pour the rest out but it's drinking pretty easily. Can't wait to see where this goes in the next 6-12 months.
Peat-smoked session porter (sampled at 40 degrees):
Aroma: Porter aroma with notes of chocolate, a lightly sharp roasty twang, caramel malts, clean fruity esters, and some peat-smoke towards the end. No hops noted. Very clean but complex aroma for such a low gravity beer.
Appearance: A very clear dark brown with red highlights when held to the light. Tan head with good retention.
Flavor: A light but complex blend of chocolate, dark-fruit caramel malts, and a woody peat-smoke funk at the end. Low bitterness, really lets the malts come through. Clean fermentation, dry finish.
Mouthfeel: Fairly dry, but some body. Enough to not be thin. nice roasty dryness at the end, but nothing I would go so far as to call astringent.
Overall: I think my own positive response to this beer has been greater than that of other people who drink it, but I love this beer! Maybe it is the fact that it is a small beer, a bonus beer if you will, that happened to turn out really great. It's so drinkable and sessionable. I drank about 3 pints of this during the Superbowl when other good commercial beer was available. Other people have liked it well enough but only a few folks have been really impressed with it. Maybe in part it's because its a low alcohol beer?
Posted by Seanywonton at 12:45 PM 5 comments: 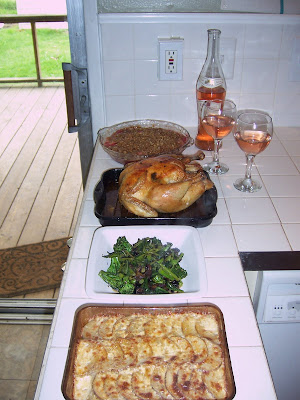 Just a few photos a really excellent meal that Clarissa and I cooked for Easter dinner. She was the chef for most of the meal, roasting the organic chicken and baking a rhubarb crisp. We are very stoked to have the PSU farmers market open again, and all the produce for this meal was bought there. I put together a classic au gratin potato dish, and a broccoli raab dish with brooks prunes, red pepper flakes, cumin, garlic, and a touch of vinegar and sugar. This might sound like an odd combo but it was really, really tasty. 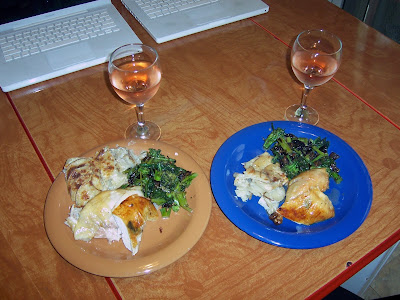 I racked my first PCTBB beer to a keg while Clarissa was cooking the chicken, and took a little flavor sample which seems promising. I decided to dry hop it in the keg. Other than that, I didn't have a beer all day! We made a nice apertif cocktail with Bulleit bourbon, homemade ginger syrup, soda, and mint (I love a good bourbon cocktail). The rose was great with the main course.
Oh man, we slacked on our opportunity to make an Easter day "Cadburry Egg Nog" from This Is Why You're Fat, which we might have to do as a belated easter cocktail soon. It looks like a sugar-induced belly-ache in a glass!
Happy Easter!
Posted by Seanywonton at 1:16 PM No comments: