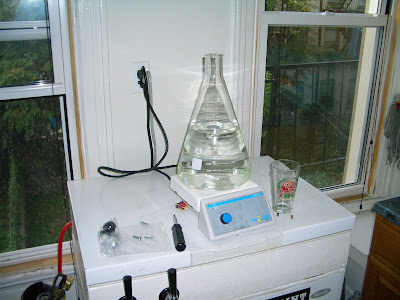 OK, so this is one of the things I've been wanting to get for a while, in the continuing effort to improve my brewing. I think the Erlenmyer flask is 10 times more important than the stirplate though. The stirplate just gets you more yeast growth per volume. But the flask lets you do simple, quick and sterile starters.
I bought the flask from Northern Brewer for about $30 I think. Adam Winkel generously donated his stirplate to me due to equipment downsizing. He said it wasn't too powerful, and it has a hard time stirring much more than water.
The first thing I did was take off the top plate and adjust some spacers, so now the tray sits closer to the magnet and hopefully gets more pull. It seems to be working fine, but only experience will tell!
Posted by Seanywonton at 5:16 PM No comments:

I think I had Bell's Rye Stout about 5-6 years ago, around the time when I first started homebrewing. It was a very nice, characterful beer. Shortly after, when I was working at a homebrew store for a little while, I did my first Imperial Stout. I can't remember what it was exactly, some recipe out of Clonebrews.
Of course, being a new homebrewer, I couldn't leave that recipe alone. I added a pound and a half of flaked rye, and some honey. 8 months later when it stopped tasting like rocket fuel, it actually developed into a really fantastic beer.
Point being, this is not a clone of Bell's Rye Stout. I've brewed a lot of incarnations of this, and the best time was last time, at an export stout strength. It has a very creamy mouthfeel, notes of chocolate, coffee, and even cherry. It also went really well next to a shot of bourbon. This time will be a little different too, but I don't know how yet. Last time I used a british yeast. This time I am going for a little more attenuation with an American ale yeast, and I threw in slightly bigger hop additions at the end. Eventually I'll bottle this for Christmas presents for friends.
This was not my smoothest brewday. I came up a little short on my kettle volume, then boiled off a little too much, and then thinned the beer down with a quart of water. Also, I had a huge flask of Wyeast 1056 ready for this and the next day's group brewday. I didn't have a good way of measuring the yeast so I just guestimated, and judging from the lag time, I was a little low on my yeast pitch. But not a lot low. It should be fine. 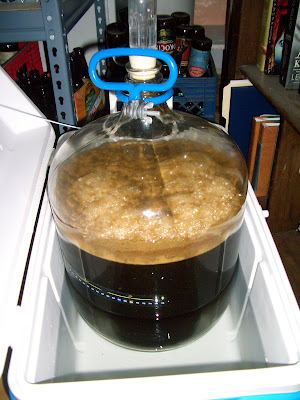 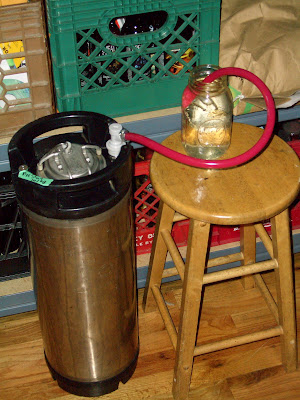 Racked to a keg on 10/20/08. F.G. 1.020. Tastes pretty good. I was looking for a little more attenuation, like 1.017-18, but I think it suffered a bit from the low yeast pitch. I am not going to mess with it though.
I tasted this beer around 11/4/08, and it is nice but it is really so thick, I couldn't really drink much. It has an inky flavor, although it is really good. So here is what I did today:
11/10/08 Pulled the keg out to warm up, rehydrated 1 package of Munton's dried yeast, and pitched it into the keg with a blow off hose attached. Hoping to drop a few points and also, as a learning experience, I'll have tried the beer at 1.020 F.G. and a lower F.G.
Posted by Seanywonton at 4:40 PM No comments:

Some pics from the NYCHG Group Brewday at Ray's Place... both beers were served at Brewtopia on Halloween weekend. They both rocked. And also the recipes:
Grisette (wheat saison)
Imperial Porter 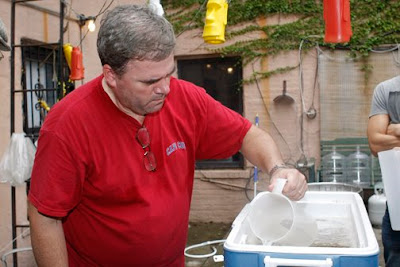 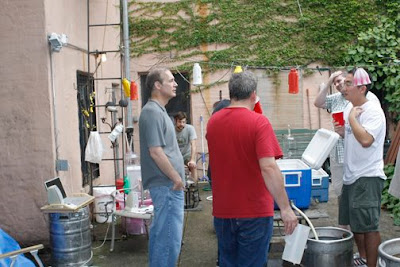 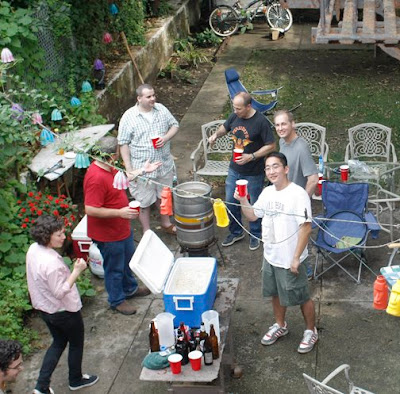 The weather was perfect... 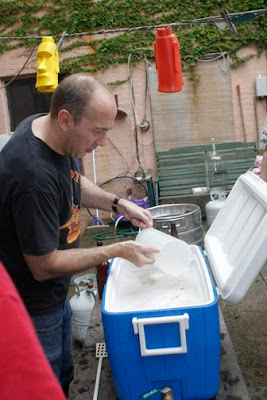 Fritz shows us youngsters how it's done... 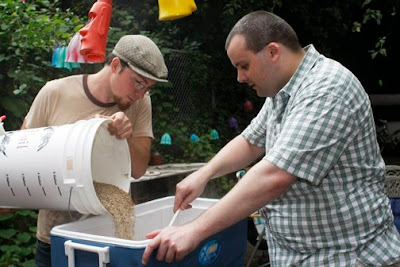 Sean and Dave mashing in the grisette 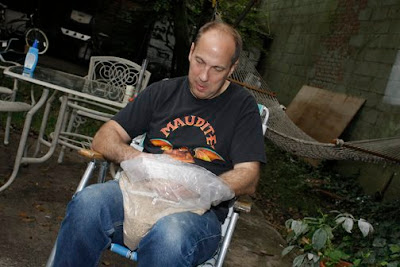 Fritz generously spearheaded the movement to pick many bits of roasted grain out of our wheat...I had a whole sack that came from the maltster with about 2% roasted barley corns.
Posted by Seanywonton at 1:09 PM No comments: