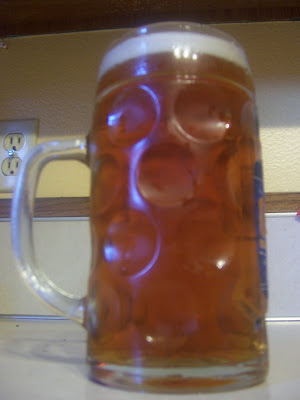 Here's a tasting of the "Golden Lager" I did brewed quite a few months back.
5.2% ABV, 28 IBU's
Aroma: "Beery" Lager aroma, moderate spicy/herbal hop character, slight malt sweetness, pretty big toasted bread/ graham cracker aroma from Munich malt & melanoidins. Very clean lager fermentation with almost no noticeable esters. Clean alcohol, no diacetyl.
Appearance: Very clear, though obviously not filtered, deep golden color, not a huge head but a well-retained white head that leaves a lacing. Fairly spritzy carbonation, just right for a traditional lager.
Flavor: Big malt flavor up front with a moderate caramel flavor, big toasted bready character, and moderate residual sweetness. Bitterness is moderate with a higher than average hop flavor than most German lagers of its type. Finishes malty but a touch of natural acidity helps dry the aftertaste. Bready malts come through again after the swallow. Fermentation character is very clean, no off flavors and you almost don't notice the alcohol at all.
Mouthfeel: Medium-full body with noticeable dextrins give it a creamy texture. Lively bubbles. slight acidity provides more of a thirst-quenching impression
Overall: This beer really fits the bill for a Dortmunder or lighter-colored version of an Oktoberfest. This was a beer that, when younger, definitely had a bit too much finish hop profile going on, that sort of got in the way of the malt complexities. It still does have more than average hop aroma/flavor for a German style lager, but it's much better integrated. The additional lagering time has really helped round this beer out substantially (I use the word "lagering" a bit loosely since it really just sat in a keg at about 38 degrees for a few more months). My main complaint is that the Munich malt comes off as a bit too heavy, or maybe it's coming more from the carahell, but I get a little too much bready flavor in the finish that almost makes it seem earthy or vegetal, if that makes any sense. I would play around with the proportion of specialty malts a bit, perhaps lowering the percentage of both Munich malt and carahell, and adding back a little caramunich for color and residual sweetness. I would also reduce the finishing hops by a half-ounce. I like the yeast, but it also might be fun to play around with a "malty" lager yeast, as opposed to this "clean, dry" version that is admittedly a great workhorse lager strain. If I wanted to perfect this beer though, I would probably start by adjusting the malt and hop bill, and then play with the yeast later once I got that dialed in. Overall it's a very good drinking beer, quaff-able, with the overly bready character being slightly annoying and keeping me from going back for a second pint, but the lager brewing technique is very spot-on and that's what's most important.
Posted by Seanywonton at 1:28 PM No comments: 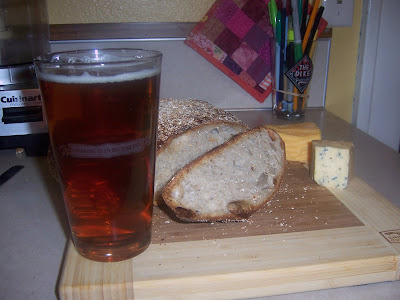 Ah, a day off. I don't get enough of these right now, and I'm enjoying it! I haven't left the house or even put on real pants for that matter. I am wearing Clarissa's pajama bottoms because mine are in the wash. But you don't want to know about that...how about a homebrew tasting?
Wontonamo Bay IPA - Batch 2
Aroma: Piney, spicy, slightly oily hops, some general citrus/fruit aromatics with a little grapefruit. Fairly dank, with a light caramel malty note, very clean/background malt aroma, no diacetyl, clean fermentation profile with clean alcohol.
Appearance: Very clear, deep copper with moderate carbonation. Wispy white head, but OK retention, would probably persist longer if carbonation were higher. The finings seem to have helped the clarity quite a bit compared to my previous hop-hazed beers (which I really don't mind at all).
Flavor: Full-on hop blast in the first sip, a lot of flavor hops going on here. I get a little onion from the summit, an overall spicy, herbacious and piney flavor, a little grapefruit. Malt is very clean, just a touch of caramel malts let the hops really come forward. Bitterness has calmed a bit since it was first brewed, but it is still has a clean, bitter, slightly woody finish with just a touch of residual sweetness. A little flavor contribution from the Carapils. I swear there is a distinct flavor to beers with Carapils, even though most people would tell you it just adds body. A bit of alcohol at the end, but hey, this is an alcoholic beverage. It's not hot or bitey.
Mouthfeel: Slight slickness or creamyness from some residual sugars, great bubblyness, crisp finish with a little hop astringency.
Overall: I think this beer has really gotten better with a little time, and it's definitely the best IPA I have ever made. But that is compared to a lot of IPA's that just seemed to be too balanced or problematic in other ways. I'm not really sure if I would change anything. I need to drink more of it to find out! It's pairing nicely with my rustic lunch of homemade bread, sharp cheddar and stilton.
In all likelihood, with my current work schedule, I won't be doing any homebrewing for the next month or so. That will be my biggest break since moving out to Oregon. So, until I get some new brews going, I'm going to try to update the blog about once a week with a beer tasting of something that I've already brewed. I hope to get back to homebrewing at least once a month by May, and really just concentrate on brewing 10 gallon batches of lower alcohol, drinkable beers, or doing sours or strong beers that I can brew and forget about for a while.
Posted by Seanywonton at 2:40 PM No comments: 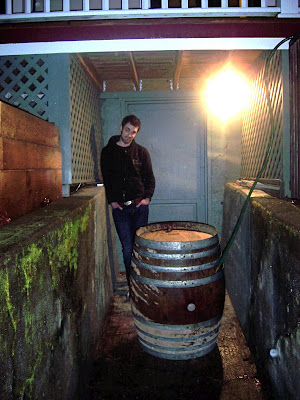 PAUL KEY
I've been wanting to get a group of homebrewers together for a barrel project together for years now, and of course the crucial missing piece of the puzzle was having someone who owned a house with a basement to host the barrel. This all changed when my friend Walker Pruett, who brews for Old Market Pub, bought a house in SE Portland with a big, dry, spacious basement. As soon as I saw it I had to ask if he was interested, and he was very excited to take on the project. I see barrel aging sours as one step above the carboy-aged sours that I have been playing with in the past. There's just something about the wood character, and the microporous environment that really seems to make a difference between a very good sour beer and a great one. My carboy sour beers have been pretty good, but seem to lack the acidity of the best commercial sours. I guess the next step beyond aging homebrew in a barrel is aging homebrew in multiple barrels, so you have blending options, and there may be some potential for that in the future, but for now this will be a great start.
The group consists of myself, Walker, Sean Burke (who is currently at Siebel taking their 6 month American/German learning program), Paul Key, Rik Hall, and Ben Parsons. I pitched the idea of a wine barrel-aged Flanders red for 2 reasons: The first was having tried an incredible pinot barrel-aged Flanders red from Mike Tonsmiere, and the second being that we already had 15 gallons of Flanders brewed that would be a source for souring bugs. 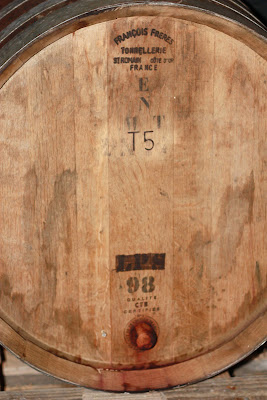 THE BARREL: LAST USED FOR 2009 EVESHAM WOOD TEMPERANILLO, MADE WITH GRAPES FROM ILLAHAE VINYARD, ALSO IN OREGON
I sourced the wine barrel from Eveshem Wood Vinyard, on a recommendation from Paul that they made excellent Pinot Noirs. However there was a bit of a miscommunication, and we ended up with a used Temperanillo barrel from them instead of a Pinot barrel. I think this will be great though; I wasn't too set on the wine varietal, I just wanted to use a barrel that had aged Oregon-grown grapes. The barrel smelled great when we got it and had already been emptied and treated with sulfur a few weeks beforehand, so all we did was give it a couple of cold-water rinses before filling. The barrel was in excellent condition with not even a tiny leak that needed patching. 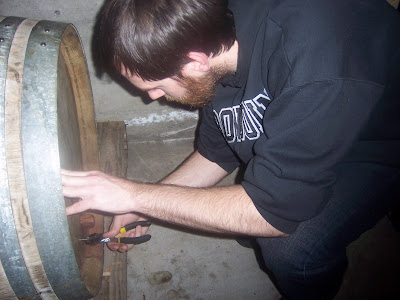 WALKER PRUETT, TESTING OUR STAINLESS STEEL NAIL FOR SAMPLING
We gathered for filling the barrel at Walker's house on March 4th, the day before my 32nd birthday, and it was a great birthday gift to start a barrel project with such a fun group of talented brewers. We had brewed a total of 60 gallons, which almost topped off the barrel, and we are hoping to brew a "top-off" batch soon to fill the remaining head-space and provide filler for the "angel's share" which will evaporate off through the wood (or be diminished by taste tests!) in the coming months or years. Currently there is about a 4-inch head-space in the barrel which I would like to eliminate sooner than later, to keep any acetic acid producing bacteria from turning this into the world's biggest batch of homebrewed malt vinegar. That would take a lot of pommes frites to soak up! 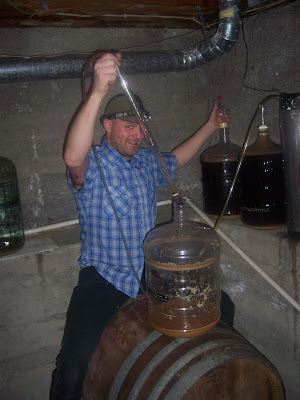 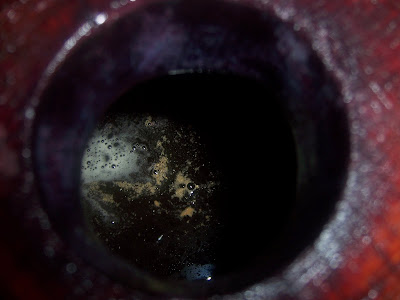 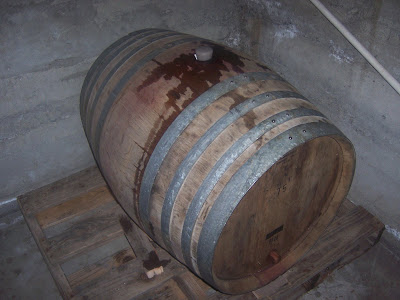 OUR "BARREL RACK", EVIDENCE THAT WE ARE NOT GREAT CARPENTERS, WAS MADE OUT OF AN OLD PALLET. 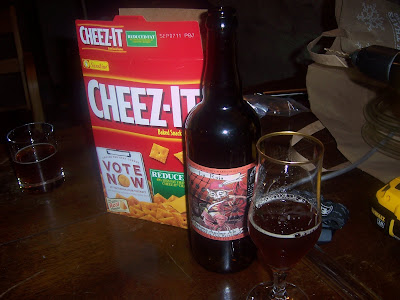 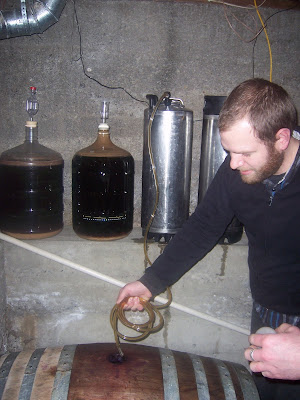 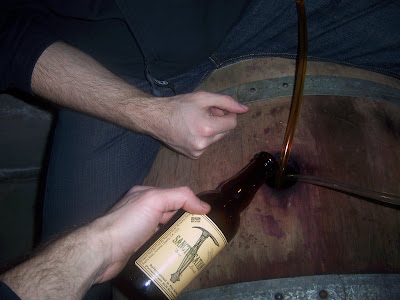 ADDING SOME COMMERCIAL FUNK
Here is what has gone into the barrel so far:
- 5 gallons of month-old "Jamil Zainacheff" Flanders Red, brewed by Sean Burke and fermented with the Roselaire strain from primary
- 10 gallons of a year-old Flanders red that Paul and I brewed using Al B (now East Coast Yeast)'s "Rodenbug" blend. This was tasting very good at one year, but my batch had definitely soured more than Paul's, I think because my batch was aged at room temp while his was aged at basement temp.
- 45 gallons of new Flanders wort based on the Wild Ales recipe, average O.G. /F.G. of 1.064/ 1.022, 12-15 IBU's, fermented with clean ale yeasts
- Dregs from 2 750 ml bottles of Jolly Pumpkin ales, 1 375 ml bottle of Russian River Supplication, 1 375 ml bottle of Russian River Sanctification (more dregs to follow, almost definitely including Cantillon / Drie Fonteinen).
The plan is to get together every 3 months or so to taste what's going on in the barrel. When we rack out, we will probably just let people collect their portion in carboys or kegs to do as they please, either adding fruit, or blending it with other batches, or serving it straight-up. We have also talked about turning this into a single-barrel "solera" project, racking out only half the beer when it's ready and adding something new. Who knows, maybe we will add one more barrel to Walker's basement too. In any case, I hope the beer turns out great (I think it will at least turn out very good), and it will be a great learning experience no matter what. I can't wait to see how it develops in the coming year!
Posted by Seanywonton at 3:16 PM 3 comments: