Ray and I brewed this up about a 6 weeks ago, on the 5th of July. It was a pretty rainy weekend, but we managed to get a solid outdoor brew in between some showers. I'm so stoked for this beer! I love Flanders beers, be they gold, red, brown, whatever! Actually I just tried the awesome Abbaye de St. Bon Chien, a wonderful Swiss beer that is barrel aged and very Flanders-like in its sour profile, but it ranges in ABV from around 11-15%, depending on the vintage. Ours is just a straight-up Flanders red, closely based on Jamil's recipe, but we pitched straight Roselaire blend, none of that pitching a neutral ale yeast first. If it's too sour, we can alway blend back, but I kind of doubt that will happen.
One great thing about a well brewed Flanders red, it's a real panty-dropper! Keep that in mind, fellas.
So this is the first time Ray and I brewed together on his outdoor system. Here are some pics: 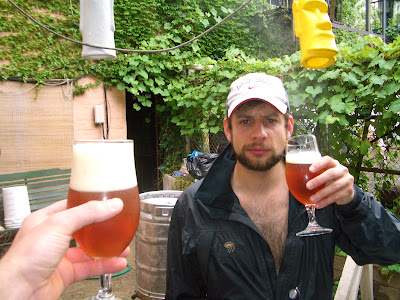 RAY'S GOT HIS GAME FACE ON 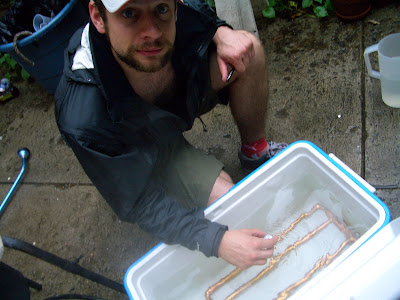 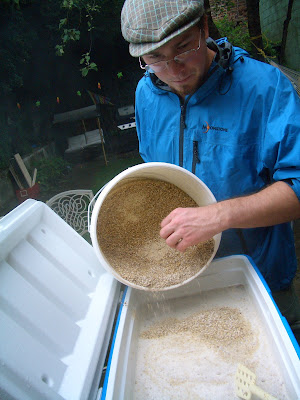 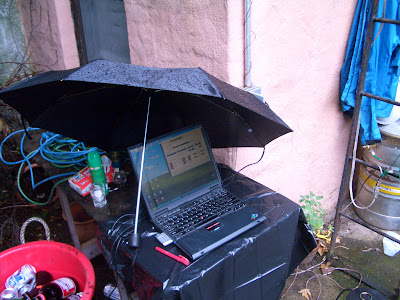 PROMASH: IT DOESN'T WORK IN THE RAIN
Chilled and whirlpooled, racked to carboys and aerated by shaking. We only managed to cool the wort to 78 degrees, something we are working on improving for future batches.
Collected 10.5 gallons between 2 carboys and pitched the entire 1 gallon of starter wort, which I had sort of made as a malty brown starter so it could go right in the beer without diluting any of it's yummyness. We used the Wyeast seasonal Roselaire blend.
Fermented at 69-70 degrees for 4 weeks, racked to secondary, and it's hanging out at 75 degrees in Ray's basement.
This spent about a year in Ray's basement and I added 1 oz. french oak cubes to my half for the last month. Then I had to pack it in a keg to move it out to Portland.
On 1/14/10, it's still tasting kind of blah. I've had it sitting out a room temp, and today I added the sour blend that Al sent me for perking this up, plus about a tablespoon of thick yeast slurry from the funky pale ale I did recently, plus about 26 oz. of the Belgian Dark Strong for a little more complexity and residual sugars for the bugs to chomp on.
8/1/10 Transfered and added:
7 lb. Montmorency sour cherries, pitted
2 lb. dark sweet cherries with pits
1/2 oz. french oak chips, not sanitized or anything
Started fermenting again at 72 degrees.
10/25/10 Racked to keg, 1.009
Posted by Seanywonton at 6:11 PM 1 comment: 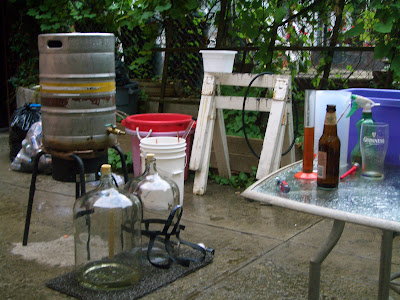 Wow, it's been a long time since I've added anything to this blog, but yep, I've been brewing. I'll try and go back and add the recipes for the last couple of beers I've done: a flanders red (also with Ray) and an imperial wit.
Ray and I did this brew yesteday on his 10 gallon outdoor setup. It was our second beer on the system and things went a lot smoother. Even with a 95 minute mash and a 90 minute boil, it was under 6 hours from start to finish.
We were going to brew this beer as our entry to the Diamond Bar's homebrew and food pairing competition on Septmber 28th, but now it looks like Ray is going to be out of town that weekend, so maybe I will just do it on my own, with this beer or something else.
Anyway, here is the recipe for a standard gravity saison, should be around 5.5 - 6% ABV. We used the Wyeast 3711 French saison yeast, which is supposedly the Brasserie Theriez yeast. It should attenuate more quickly than the standard Dupont yeast, but so far it doesn't seem to be as complex and enticing of a flavor & aroma. Also, we get a pretty killer price on American hops, so we decided to try Glacier (an American noble-hybrid) for the bittering addition.
Recipe is for 12 gallons post-boil, about 11 in the fermenter, plus almost a full 1-gallon starter was added. Including the starter, the actual O.G. is probably a point lower, and the IBU's might be 3 lower than calculated here.
O.G. 1.052 F.G. 1.006 ABV 6.1% IBU's 29
19.75 lb. Durst pilsner malt
.5 lb. aromatic malt
.75 lb. German sauer malt
58 gr. Glacier pellets 6.1% 60 min
28 gr. Styrian Goldings pellets 1 min
28 gr. East Kent Goldings 0 min
Mash: 7.5 gallons water to 157, mashed in to only 140. We were way low for what we wanted, so we added another half-gallon water to bring the temp up to 147. Altogether it had 15 min at 140 and 80 min at 147.
Sparged with 10 gallons at 170 degrees, collected 13.5 gallons at 1.049. I think this reading may have been slightly off though...might have been more like 1.047.
Boil: 90 min. Hop additions as noted. 1 tab whirlfloc, 1 tsp. wyeast nutrient at 10 min.
Chilled to 71, collected 11 gallons and pitched a 1 gallon starter (1.042 O.G.) of Wyeast 3711.
Fermented in the mid 70's, probably hit 78 at high krausen.
Racked to kegs on 9/7/08.

Final Tasting:
This beer turned out really great. It was one of my best beers in a while. I wouldn't change much, maybe reduce the Sauer malt by half. Didn't really seem necessary for the flavor. It might also be nice to up the finishing hop additions by 25-50%.

I bottled this beer for competition with my new beer gun, but it only got a middling score (low 30's). I didn't do such a great job with my first time on the beer gun and lost most of the carbonation, and that's a pretty big fault in a saison. It really changes the judges' perception of the beer. When I was trying it off the keg, I was thinking it was a 39-40 point beer.
Posted by Seanywonton at 7:56 PM No comments: