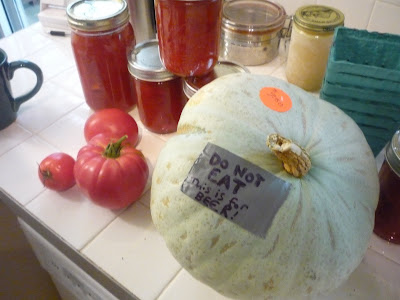 Clarissa and I picked up this beautiful Sweet Meat squash at our first Portland farmer's market a couple of weeks ago. As soon as I saw it I knew it was destined to go in her birthday beer. I've done a couple of saisons with squash in the past years, but not since I have been a more skillful brewer. The last ones had way too much spicing added, to the point where it was like, "Oh, nice ginger beer!" (Also pictured: our strawberry freezer jam, which is awesome and incredibly easy to make.)
I've played with different spicing, but the previous versions never relied on the classic pumpkin pie spice mix. For this one I was just looking for low levels of complimentary spice that would let the saison yeast take the main stage, and hopefully the squash will make a subtle appearance in the flavor, aroma, and mouthfeel of the final beer. 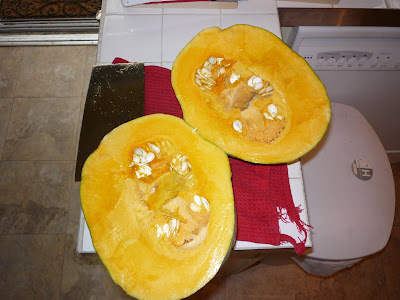 First I cut it in half with my big chinese clever. It only gets used for big ridiculous tasks like this. I cored out the seeds, then I roasted it for about 90 minutes at 400 degrees, until the meat was soft. I added about an eighth of an inch of water to each pan to help it steam. After I took it out of the oven it collapsed a bit. 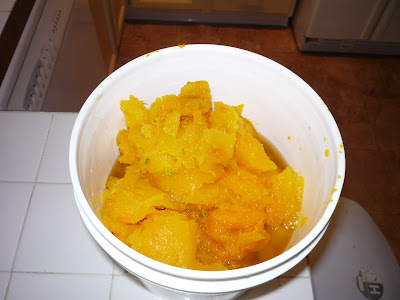 The skin was pretty thin on this squash, so I got a pretty good yield. A 9.5 pound squash yielded 6+ pounds of roasted meat. I kept the squash in the refrigerator overnight until the brewday. 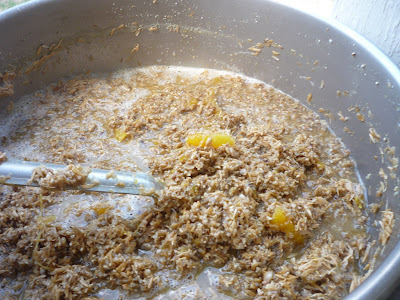 I added the squash, mashed up fairly well, to the mash water before I added the grains. I did this so I could calculate it in with my water volume and hit my mash temp correctly. Even though I used a half pound of rice hulls, I still got a SERIOUSLY STUCK MASH! It took another half pound of rice hulls, adding more water, and repeatedly re-stirring and recirculating wort to eventually get the sparge going properly.
During the mash, I also went down to the local hardware store to pick up the fittings for a kettle diverter tube, which I have been lacking until now. Below is a pic of the diverter tube, which I use when no whole hops are being used, and the bazooka filter, which I use when brewing with whole hops (or a mix of pellets and whole). 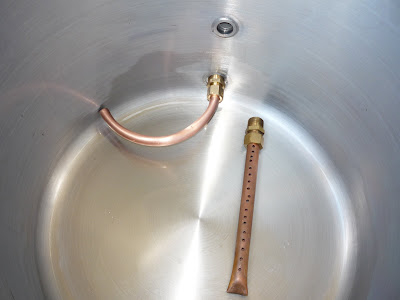 This beer only received one hop addition at 60 minutes. I used some 2007 East Kent Goldings, which were still sealed in a nitrogen barrier bag. They still smelled awesome, actually, but I calculated the Alpha Acids down for age (4% to 3%).
At the last 2 minutes of the boil, I used a mix of chamomile, coriander, and ginger for what I hope will be a subtle spicing effect. 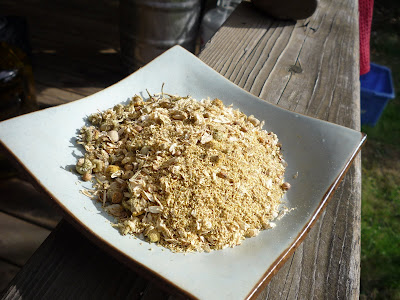 That 3711 is quite the beast! Have you thought of splitting any of it and souring it?

Yes, it's a bit aggressive to say the least!
Not planning on souring any of this one, mainly because I hate to split ferment 5 gallon batches due to labor intensity. I'm lazy!

I racked this beer over last night, it tastes strong and... weird. Let's see, sometimes they need some time to come into their own.

I was planning on brewing up 10 gallons of a hoppy Belgian session amber with all Willamette hops next, to break in the 10 gallon brewing setup. I will probably brett half of that.