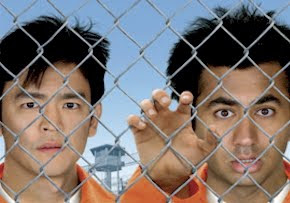 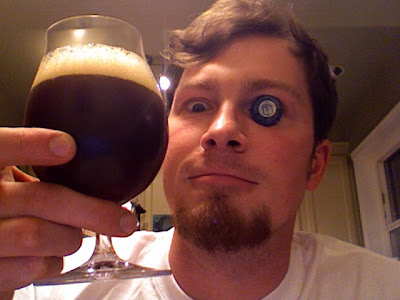 My good friend Forrest told me that he was sending a few beers my way from his last trip to the Netherlands. I was expecting something cool from a Dutch brewery, but he blew my mind by sending some Westvleteren (8, 12) and Drie Fonteinen (Oude Geuze Vintage 2005) bottles! After an exhausting 13 hour day at Alameda, washing kegs and doing a beer tasting at a local grocery market, I figured I owed myself a treat, so I broke out the bottle of Westy 8.
Aroma: Lactic acid and some barnyard, dark fruit aromas like plum and prune. Light bubblegum and floral esters, some pineapple. No hops, alcohol is very subdued. Some light oxidation coming through as coconut.
Appearance: Big frothy tan head and a murky auburn to brown color. High carbonation. Some chunks made it into the glass, probably kicked up by the high carbonation.
Flavor: Rich fruity plum / caramel flavor, very deep. Some banana, some acetone flavor from higher alcohols. Significant bitterness and actually finishes fairly aggressively, but not much hop aroma or flavor.
Mouthfeel: Prickly high carbonation, medium body, warming finish.
Overall: I think this is probably not the beer in its best condition unfortunately. I would guess it has been "warm aged" in a bottle shop, because it is still displaying a fair amount of acetone and higher alcohols that would probably dissipate with time if properly cellared. There is definitely some lactic acid, most likely from a little brett sneaking in and taking over and adding a funky note that isn't bad, but probably isn't supposed to be there. Still after all that, this beer is enjoyable and it is a delight to get to try it firsthand!
Thanks again Forrest! I'm looking forward to trying the other 2 beers, and I'm hopeful that the Westy 12 and the Geuze made it in better condition!
Posted by Seanywonton at 9:28 PM 2 comments:

Tastings and catching up with some random crap 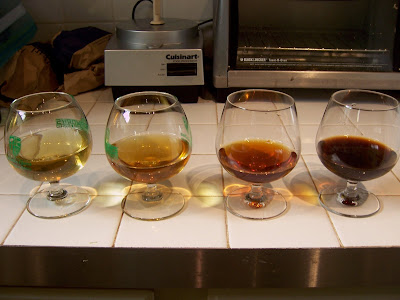 In a feeble attempt to make it look like I keep this blog up to date, here are a bunch of photos taken over the last few weeks, accompanied by some coffee-fueled gibberish.
Above is a sampling of all the sour beers I have in carboys right now. From left to right: Berlinner Weisse, Flanders Gold, Flanders Red, and Deliverance. The Berlinner has a lot of brett going on as well as a fairly sharp lactic twang, and also a funky menthol flavor. I'm not really sure where the menthol flavor is coming from. Maybe hop choice or one of the random bugs that made it in from the un-boiled grains. I think I'm going to keg it soon, let it cold condition for a few weeks or so and see if it gets any better. I don't think it's going to improve.
The gold is tasting really nice, quite hoppy and on it's way to becoming a nice sour in a year or so. The red is pretty clean still with lots of caramel malt, toastyness, and a little lactic zing. The Deliverance was my favorite to drink right now, having some funk and also some roasty coffee notes from the dark grains. I think this comes off as slightly metallic early on but the last batch seemed to aged this flavor out, so I'm not worried. I should probably stick them all except the B-weisse in the crawlspace soon to weather out the hot months. 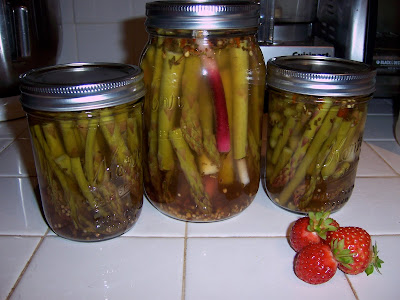 Here's some pickled asparagus Clarissa and I made. It's a great garnish for bloody mary's. I wish we would have thought of it sooner as we just got the tail end of the season and just enough asparagus for 3 jars. We basically used the recipe from this site. 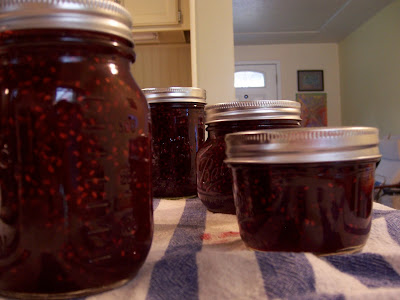 This is some wonderful raspberry jam we made, using some really nice farmers market berries and the recipe inside a packet of Sure-jell. It was pretty easy to make and it is probably better than the Bon-Maman stuff we usually buy, and half the cost. We need to get a pair of canning tongs, I kept burning my hands trying to get the jars out of the hot water bath! Very frustrating. 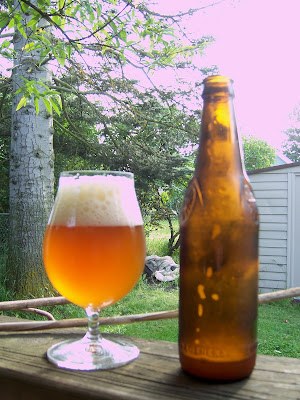 Here's a tasting of the strong brett saison I brewed in December and bottled in late March. It's come a long way in the bottle and I think it has not peaked in flavor yet.
Aroma: Brett, acidity, lemon & pineapple esters, barnyard, hop-spice, and some malt sweetness.
Appearance: Dark gold, hazy glow, nice frothy head and high carbonation. Unfortunately, it may have been a slightly dirty glass but the head fell rather quickly. Will see if that is the same in future tastings.
Flavor: Dry, spicy, hoppy with a middle candy-like sweetness that transitions into a dry, sourish finish. Hops again but well integrated into a very dry, crisp finish with some horse-hair flavor from brett. Noticable alcohol from strength but not hot.
Mouthfeel: Very carbonated, with some acidity on the sides of tongue, just a slight touch of astringency due to extreme dryness of the beer and carbonation. Some alcohol warmth.
Overall: I'm very impressed with this this beer, it seems to have a lot going on for it and it's incredibly close to what I imagined it would be. We'll see if there is a foam-stand issue on the next sampling. For now I assume it was the glass.
On a non-brewing theme, we went down to the Eureka California area for my friend Lou's wedding. After the wedding we got a day of rock climbing in with another good friend, Eli, and his girlfriend Carla. 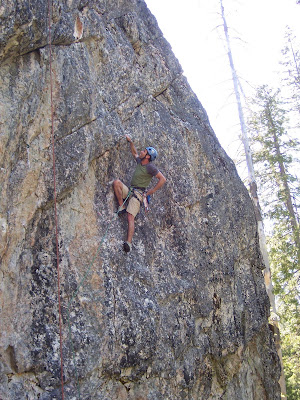 Above is Eli leading a 5.10C sport climb. I taught Eli to climb but he has kept up with it whereas I haven't! So he is way better than me now. This is a crag out near the Trinity river about 45 minutes east of Aracata. 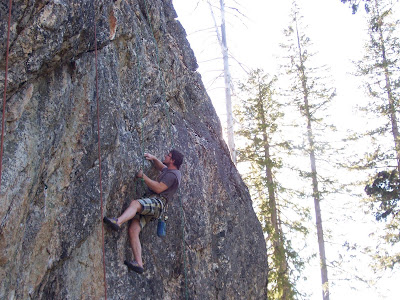 I followed the 5.10C, it was a good climb with a slightly tricky crux. I also lead a 5.8 which was pretty scary for be because 1) this was my first roped climbing day in about 9 years and 2) it was off vertical, on sharp rock so I really didn't want to fall! 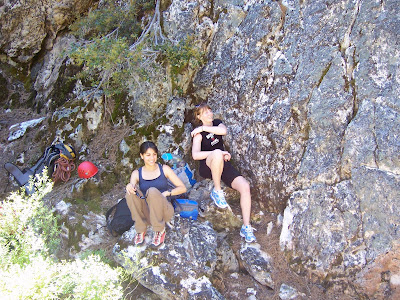 Clarissa and Carla also did some climbing but unfortunately I did not get pictures of that. It was C's first day on a rope and I thought she did great once she got used to taking falls and trusting the rope / belay. 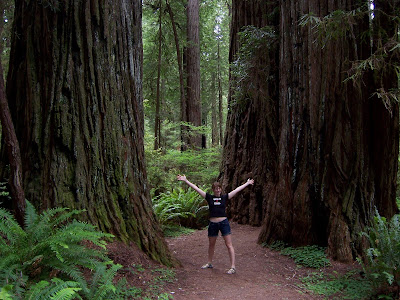 On the way back to Oregon we stopped in the Redwoosds and got a day of swimming / cliff jumping in on a pristine river. It really felt like vacation! When we got back to Oregon it was shitty out still, but now it seems we are breaking into our first heat wave of the summer and it is sunny, finally!
Posted by Seanywonton at 9:21 AM 1 comment: